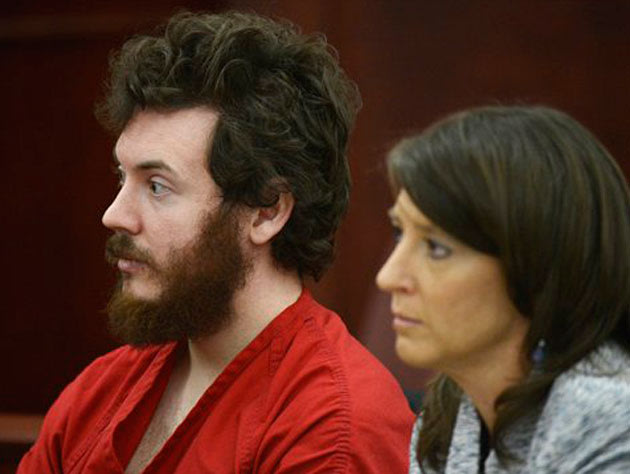 "Justice is death," Brauchler told the court, minutes after the hearing started.

Brauchler said his office surveyed victims and hundreds of people connected to the massacre to help make the decision.

"I hope I can be in the room when he dies," said Bryan Beard, whose friend Alex Sullivan was killed in the theater. "If you cause death upon somebody, I believe the only justice is death."

Reporters in the courtroom said Holmes appeared to have no reaction to Brauchler's announcement. His parents, Robert and Arlene Holmes, reportedly clasped hands and then embraced when the DA disclosed his plan. A few people on the victims' side of the courtroom cried.

Holmes, who sat about 15 feet from his parents, made strong eye contact with them when he entered the courtroom.

Marcus Weaver, who was shot in the arm during the July 2012 attack, said he wished Holmes would admit to the killings: "Holmes has an exceptional opportunity to [tell] the world, 'Hey, I made a mistake, and I'm owning up to it.' Man up. Save us all the difficulty. Accept what you did. Accept your fate."

Weaver said he would rather see Holmes admit guilt than watch him die.

"You have an obligation ... if you're guilty to plead guilty," Weaver said.

In another development, 18th Judicial District Chief Judge William Sylvester told the court he has reassigned the Holmes case to Judge Carlos A. Samour.

Sylvester, the administrative judge for four counties, wrote that "logistical demands" and the "enormous consumption of resources" of a death penalty case necessitated the switch.

Samour took the bench after a short recess Monday morning. His first decision was to delay the start of the trial from Aug. 5, 2013, to Feb. 3, 2014. He projected the trial to last four months, despite Holmes' defense team arguing that they'll need longer.

"We will do what we need to do to defend his life," defense attorney Tamara Brady said in court. "This is not an ordinary case."

The decision to seek the death penalty follows last week?s legal theatrics in which Holmes? defense team said it would enter a guilty plea if the district attorney settled on a life-in-prison sentence.

?It is Mr. Holmes? position that this case could be resolved on April 1,? his public defenders announced last Wednesday in court filings posted online by the Denver Post. ?Mr. Holmes made an offer to the prosecution to resolve this case by pleading guilty and spending the rest of his life in prison, without any opportunity for parole.?

Not only did prosecutors decline the guilty offer?first made prior to Holmes? March 12 arraignment?but they also lambasted the defense for making it public.

In a 13-page rebuttal to the defense, the prosecution dubbed the public announcement ?grossly improper? and ?a calculated attempt to improperly inject? the plea in front of the Aurora community and the world. The prosecution also accused the Colorado public defenders office of violating the court?s order on pretrial publicity.

A mental health defense would be central to Holmes? case, his attorneys have implied repeatedly. Nearly all courtroom argument so far has revolved around his mental state, with the prosecution alleging that Holmes carefully crafted a ?detailed and complex? scheme to commit mass murder?with his sanity fully intact.

At the arraignment, King told Sylvester that Holmes wasn?t ready to enter a plea because the defense didn?t know whether the prosecution wanted to pursue the death penalty. The judge then entered a not-guilty plea on Holmes? behalf, as allowed by law.

Also at Monday?s hearing, the defense and attorneys for Jana Winter, a FoxNews.com reporter, argued whether Winter must divulge the names of two law enforcement sources who gave her information for a July 25 story about an unopened package that Holmes mailed to the University of Colorado at Denver. Winter, quoting the unnamed officials, reported that Holmes sent his former school psychiatrist a notebook containing drawings that foreshadowed the attack. Because of a court gag order, those law enforcement sources were prevented from talking to the media.

Holmes? attorneys have argued that by talking with Winter, the two anonymous sources damaged the defendant?s right to a fair trial. Winter was in court Monday morning, but Samour hasn't ruled whether she should testify.

Holmes, 25, was a former neuroscience student at CU-Denver before the massacre at the premiere of ?The Dark Knight Rises,? the latest Batman movie. Police arrested Holmes, who was wearing body armor and had weapons close by, behind the theater shortly after the shootings. Police say he also booby-trapped his nearby Aurora apartment with explosives to injure or kill anyone who entered. He faces multiple counts of murder and attempted murder.