Newark, New Jersey Mayor Cory Booker answered viewer questions from Facebook and Twitter for an ABC News' web exclusive before joining the This Week roundtable on Sunday. After Booker discussed his future Senate plans, his time as Newark mayor, and his Twitter routine, he admitted to a few other personal habits. He's a self-proclaimed 'Trekkie,' loves Ben & Jerry's ice cream, late night television, and believes that his job "drove him to drink" - but coffee is the vice in question.

"I did not drink coffee before this job. I always say this job drove me to drink," Booker joked.

How many hours a day do you spend on Twitter?

"I guess it's so seamless that I don't really think about it that way. So it's like going from meeting to meeting, or waiting for people to come into the office. A lot of it happens in the early morning when I wake up or late at night, which gives a lot of my followers this idea that I don't sleep. But if I wake up? like this morning around four o'clock, I'll start checking my Twitter and responding to people."

Do you feel you can take a day off from tweeting?

"You know, it's so integrated. It's like saying 'do I want to take a day off from talking or do I want to take a day off from connecting to people.' And I've looked at the averages, maybe sometimes 15, 20 tweets a day. Sometimes it goes down, sometimes it goes up depending on what's going on. But? this is the democratization of our democracy in a weird way. Because so many forces are pulling people away, leaders away from the people, special interest groups, money in politics, creating more of an elite environment. But I think that social media has a chance to pull people back and have politicians far more accessible, far more transparent, far more connected, and ultimately move from a hierarchical society to a level playing field."

What are your thoughts on 'Clinton/Booker 2016'?

"Unless Clinton/Booker 2016 is some kind of new rock band that might be coming out? look, at the end of the day in life, purpose is far more important than position. And so many of us lose sight of where we are by looking at where we're going to go. So right now I'm mayor of the city of Newark and I love what I'm doing. In many ways, this is my highest aspiration in terms of having a job where I can really help people. The next thing I'm thinking about doing next year is possibly running for the United States Senate. But I think when you start going further? from that, it starts to get a little absurd."

What do you believe is your best policy achievement as mayor?

"I think the best thing you can say, and it's less policy and more spirit, is that we've taken a city that used to be disregarded, disrespected, and just plain dissed, that was losing population, losing tax base, losing business, and now we've reversed those trends. Now people really have a lot of respect for Newark. First time in 60 years our population is growing. Our tax base is growing. The first new hotels in our downtown in 40 years. First new office towers in decades. So creating jobs at a pretty dramatic clip for our residents."

"Wow. Star Trek, unequivocally so. I'm a Trekkie. So of all the Star Trek universe, I would say 'The Next Generation' was my favorite."

"Jean-Luc Picard, of course. He's got the greatest haircut."

"I have lots of pet peeves. But I think the biggest one I have is just meanness. Rudeness. For me, it's like the deal breaker. I'm on a date, and the person is like rude to the waiter, to the bus boy, something like that, to me, I think it's just?you know, life's too short, every moment we have a chance to show kindness, and that to me is the thing I like the most about a human. When people don't even think that you're being watched, and then you see somebody bend over and pick up some trash, or help somebody, that to me lifts me the most to witness that. And the opposite of that is what makes me frustrated the most."

"So many. Look, I think that two things I indulge in the most? one is food, so I have an illicit relationship with two guys named Ben and Jerry. That is enjoyable. And then you know it's just bad TV. So late, late at night if I come home particularly discouraged from the day, I can see myself sitting with ice cream and watching something on TV - John Stewart, Stephen Colbert - hoping that they'll make me laugh at the end of the day before I hit the sack." 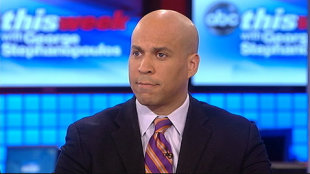